We may just forget to die

Reconnecting with Patrick Leigh Fermor while reading the wonderful salvaging of the last section of his journey from Holland to Constantinople on foot, The Broken Road.

His words, recounted here, are good words to live by, to be grateful and thankful, and enjoy sunny days, beautiful places and good friends.

“Yes, Paddy, the mountains, the food, the air and the sea,” said the young man, nodding in agreement.

And then Paddy said to him: “And for all these reasons and more, we may just forget to die.” 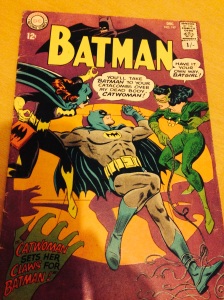 Teenage boys are strange creatures. I should know. I used to be one. And once you’ve been one a part of you remains one. So something of me is 14 and only really interested in two things: football, and comics. Batman comics, to be precise.

American comics became a bit of a thing in the early 1990s. I think it had something to do with the spate of superhero films that came out then. For me it started by gazing at the exotic, small comic books that were tucked away on the bottom shelves. For 60p you could take your pick of Batman, Superman and Aquaman from the DC stable, and Fantastic Four, Spider Man and The Punisher from Marvel. 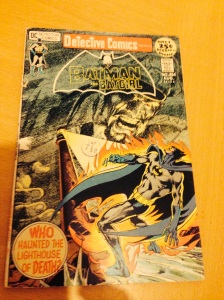 One of many golden finds

Most kids I knew who got into comics went for Marvel. For some reason I chose Batman, and stuck with him. I quickly went from poking around north London newsagents to nearby specialist shops – Mega City in Camden and Comic Showcase in Covent Garden in particular. And from here, the true mecca of enthusiastic boys (always boys) – weekend comic markets. These jumble sales, attended by mysterious sorts who packed a few boxes of exciting wonders in a van were where I first learnt to haggle, shove other people out of the way in search of a much sought after edition, and grew my collection.

A kind of more literal forerunner of Eraserhead

For a couple of years that was it for me – I managed to pick up Batman comics going back to the mid-60s and also ventured into independents, especially the saga of a samurai rabbit, Usagi Yojimbo by the incredibly talented Stan Sakai. Slowly records and corduroy trousers became the object of my desire, but my fourteen-year-old-self had a plan. All my comics were lovingly protected in plastic bags with backing boards, waiting for the day when I rescued them from storage. And now I have. And looking through them again at their mad covers, with the smell of dusty halls in King’s Cross and Westminster where I got them coming to mind I can safely say that them was fine, fine days. 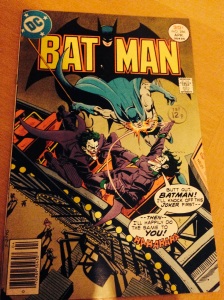 Feminism meets Batman. You suspect the artist didn’t quite grasp the concept