BBC Knowledge, the World and a heap of great travel ideas

The result is a site in English and Polish which take readers on a trip around the world, helping  them plan their travels according to their interests and passions. You’ll find my suggestions for the world’s best ancient sites, country retreats, underground experiences, activity trips, star-gazing, lost cities, train journeys, movie locations, cycling trips, relaxing, sea views and road trips. I’d love to know what you think.

I get a lot of Marvin Gaye fans coming to the site, hopefully who aren’t disappointed by the brief mention of his time in Ostend in this article.

There’s a classic documentary about the soul legend’s time in Belgium, Ostend Terminal by Richard Olivier. As well as showing Marvin at peace and performing beautifully it documents his thoughts on Ostend, often to a backdrop of black and white footage of the town in its belle epoque heyday.

In perfectly describing the port as ‘a beat back, maybe two beats back’ from the cities he was accustomed to living in Gaye shows a talent for catching the spirit of a place.

You can find the full documentary here.

The Guardian’s David Stubbs also wrote an excellent piece about Gaye’s time in Ostend in 2005.

Here are two recent pieces I wrote for Lonely Planet:

Comments welcome there or here!

‘There is in London all that life can afford.’ – Samuel Johnson

The alleys and lanes snaking north from Fleet Street are full of interest, and are an easy detour for a quick fix of London history. Their car-free atmosphere offers a taste of how London once was, with city workers hurrying here and there. If you follow your nose you might end up at Gough Square, home to Samuel Johnson’s House and what, as far as I know, is the only statue in London devoted to a domestic cat.

Hodge, the immortalised moggy in question, lived with Johnson in the house on Gough Square for many years. So devoted was Johnson to him that he’d go out to personally buy him oysters, then so plentiful as to be staple grub for London’s poor. 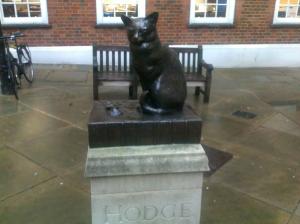 Dr Johnson, who was prone to black moods, seems to be have been most upset by Hodge’s demise. One of his inner circle, Percival Stockdale, eulogised Hodge in an apparent bid to cheer the Doctor up.

The general conduct if we trace
Of our articulating race,
Hodge’s, example we shall find
A keen reproof of human kind.

Then in thy life exert the man,
With moral deed adorn the span;
Let virtue in they bosom lodge;
Or wish thou hadst been born a Hodge.

Not lucky enough to have been born a Hodge, it was a black cab back to the office for me.

The usually-closed entrance on Southampton Row

It was then with some excitement that I arrived at Southampton Row for a tour of the tunnel, offered as part of a viewing of London artist Conrad Shawcross’ latest installation. I wasn’t sure how many were here for the art and how many for a gawp at this secret place, but there were twenty excited people in my lunchtime group.

First we descended the ramp to the old station platforms. Wandering along the tracks gave a sense of the size and space of the tunnels, and how different so much of London would have been with trams trundling up and down streets. The network seems with today’s eyes to be hopelessly overblown, but in many places trams ran in place of conventional buses. It’s difficult to imagine Camden, Kentish Town, Archway and East and North Finchley with steel wheels on the streets. Yet Melbourne, Australia kept its urban trams and is rightly famed for it.

Not much survives of the station which has since been used for filming and the storage of stuff: rusting lampposts, shrink-wrapped machines and bits and bobs owned by Camden Council, who own the space. Posters on the wall didn’t appear original, though one had some interesting detail of the Northern Heights section of the Northern Line.

I turned around to notice the group has strolled off leaving me goggling at the walls, so I took the opportunity to dart up a flight of stairs and, with my head poking through a grate at street level, startle a few passers-by.

I’m not an art critic but found the installation itself astonishing. Giant spindles attached to a custom-built (and locally made) pair of machines, which inch-by-inch pull away from each other in the process winding coloured wool into a length of rope as long over 50 metres long. The machine moves on wooden tracks laid down especially. We were asked not to take photos but you can find an image in this review. It would be thrilling to imagine Shawcross being let loose on the Tate Modern’s Turbine Hall.

The slow walk to ground level completed the group dissipated quickly, absorbed back into the busy pedestrian traffic around Holborn tube on a Friday.

I wrote some tips for the Daily Telegraph website yesterday on how to see London for less, wearing my Lonely Planet hat. London is never going to be cheap in the way that classic backpacker destinations are cheap, but currency fluctuations mean you needn’t be a Russian oligarch to have a good time here.

What’s the trick? Book ahead for flights and be smart with hotels, getting on mailing lists and looking out for room sales. Americans are used to calling hotels and chancing their arm at haggling to get a better rate – London-bound visitors, especially those planning on going four star or higher, should do the same.

Most of all, make the most of what is cheap or free: bus travel, some of the best museums and galleries in the world and lovely green spaces. While saving money you’ll see the best of the city.

There are more London tips in my free travel planning articles.