The space in between. 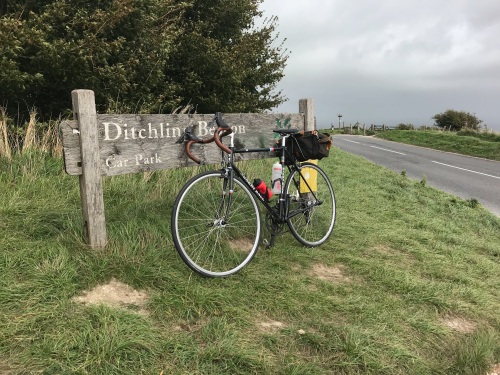 South of London there’s all this. There’s Surrey, and Sussex, and roads to the coast. Lots of people ride from London to Brighton, but my far north London base meant that this has never made any sense at all as a cycling outing. Slog through the suburbs for a couple of hours then have to do the same on the way back as the train will drop you back at Victoria.

Not that I feel like I’ve really given the south coast a chance. My entire experience of Brighton has been watching Ride and The Charlatans play a great concert in 1994, then drinking cider by the seaside rather than touring Oxford colleges the same year, then not going for 20 years until Arsenal played Brighton in the FA Cup a few years back.

So a meeting with a Brighton-based colleague, blessed with the sense to flee the capital that I don’t have and doubt I ever will presented something of an opportunity. Head down by train, I thought, have the meeting then steal a few hours and ride back home again. 65 miles, or thereabouts, and no fiddling round taking trains and riding back home from the middle of town. Having stared at the map for long enough to convince myself it was just enough of a foolish thing to do to make it worthwhile I committed to the journey.

A fiddly ride to Victoria got things started. I find it an odd station, really two stations in one, and stuck in a remote part of west-central London but completely facing the river and points beyond. It promises adventure – and used to be the starting point for services as far afield as Constantinople – but today never really delivers and Brighton is about as good as it gets from here. Still, the deserted morning Gatwick Express service got to the south coast fast enough. On arrival I rolled down to the seafront where the grey-brown waves were dealing with a storm. The wind was blowing from the south. It was time, soon, to head for home again.

Once my meeting was concluded I made my way out of Brighton, aiming first for Ditchling Beacon. In my experience anything even remotely challenging in the south of England gets talked up to Alp-sized levels of difficulty, and I found riding up this to be an enjoyable thrash with the wind at my back. It seemed pretty steep on the way down and I don’t doubt its fearsome reputation for Brighton-bound riders. The views, glimpsed, were tremendous and it is an ongoing regret I’m not better at pausing on rides like this and taking in what’s around a little more.

A couple of happy hours later, once past pretty villages like Lingfield and miles of long, straight running and I crossed the M25, marking a formal entry into Greater London. Here the imposing bulk of Whitehill Lane asked more serious questions of tired legs and probably inappropriate gears and. I wheezed the last 50 metres or so wondering if that was me, the hill or the time since riding the Fred. Probably all of them. 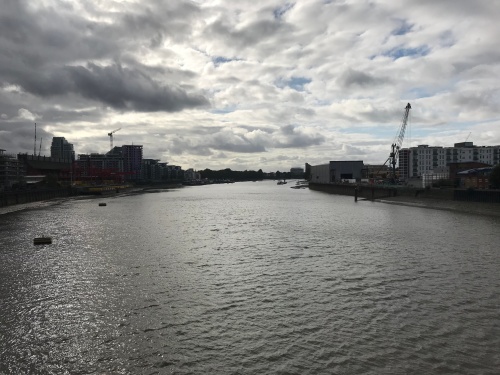 Still to come, crossing London. Across places I had no prior knowledge of – Caterham, Coulsdon, Wallington, Mitcham, then the semi-familiar Tooting, Earlsfield, Wandsworth. At times the Wandle meandered sweetly around me. Most of the time I was fighting heavy traffic, seemingly static for miles on end, a sporting ride in the country now brutally shoved into a commuter slog, and on it went. At some point I crossed the river, and on and on through gridlock, reaching a sweaty apogee climbing up past Vale of Health on Hampstead Heath. All of London just a traffic jam. From this point on, 70 miles in to the day’s riding I just wanted to go to sleep.

It is an odd feeling having ridden home, and both warped time a little and seen the landscape and scenery change in slow motion, yet still get home using only my own legs.

More change. Can you feel it in the water? At the pond change is everyday. It’s never the same twice, and would be disappointing if it was. On Friday I pretend its winter and run up and over Highgate village. Dawn stretches to the east over the city and far beyond, but the sun isn’t high enough to do more than poke through the trees once I’m in the water. Still, summer lingering on, warmer water than you’d expect and the ropes staying out, far out.

Two days later on the stroke of 7am and walking out along the jetty in dark grey rain. It’s still busy, but I forget some people swimming now don’t stick it through the year and have one of those conversations where you sound like a bit of an arse going on about cold weather. Yes, those conversations I really like. Remind me to bore you sometimes. You mean you don’t?