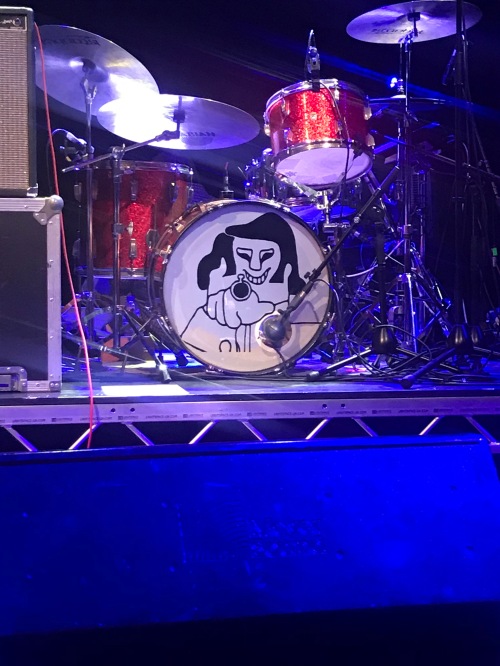 Tim Gane, guitarist and one half of the driving creatives forces behind Stereolab ambles across stage and mischievously plonks a key on one of the vintage keyboards around the stage. Returning for an encore minutes later, Laetitia Sadier, the other half, notices him repeating the move and harries him back over to ‘his’ half of the stage. She is the singer and the face of Stereolab, who have earlier been casually described by the support act Tomaga as ‘the best band in the world.’ Last night it did not seem like an outlandish claim.

This was my first Stereolab concert for at least 15 years. Since they suspended operations their reputation has grown and grown. Would-be listeners can struggle to find a way in; lucky for me I never had this problem. My brother came home from town one day with Peng!, their first album, and I was hooked from there. With him and friends they were a soundtrack to my teenage and university years. Surrealchemist late at night in student digs in Leeds, train trips over the Pennines to see them in Manchester and Liverpool and, best of all, ridiculously sweaty concerts in London. Always in the summer.

All that said, I wasn’t quite sure whether this concert was going to be up my street. The last few albums weren’t quite as krautrock-and-chord-x with thrillingly radical lyrics – often in French – as earlier efforts, and I suspected I’d find myself enjoying it but willing something unlikely off an earlier album to be played only for everyone else to cheer when French Disco gets a crowd-pleasing airing.

There was no need to worry. Laetitia walked on stage to a smattering of cheers, then shushed the crowd as she was tuning up. Around 800 Dubliners did as they were told. Then she came back on again and made a more fitting entrance with the rest of the band. From that moment on, she, Tim and everyone else had the show in their grip, and walked unpredictably through their back catalogue.

The whole show was one long highlight. It felt like becoming reacquainted with something special that you’d forgotten you didn’t know in the first place why it was so. Anamorphose sounded like the soundtrack to a long dream. After Ping Pong Laetitia checks everyone knows the anthem to Marxist economic theory isn’t ‘just a jolly pop song’. French Disco did get an airing, but in the same ‘let’s get it out the way’ spirit it used to be. Crest, followed by Lo Boob Oscillator sounded so good it made me a bit sad for every other band that have come since them and have to try to be better.

In all of this there’s Tim, rocking out and driving what they called The In Sound From Way Out. Andy on drums pounding out motorik one minute and jazzy grooves the next, and the keyboards and bass adding up to a noise all their own. During the wig-out at the end of Lo Boob (some people in the crowd experiencing such a racket for the first time!) the bass appears to pick out the rhythm from We’re Not Adult Oriented, though I could have just been imagining it.

While in some ways this was noticeably a comeback – while Laetitia appears unaffected by time, Tim and the rest of the band have aged, and no new music was played – in others this was also a continuation of something Sadier herself struggled to describe: ‘a project…a partnership’, thanking the crowd for remembering. There never was anything so magnificent as Stereolab really going for it. It feels important for the future of humanity that they continue to for some time to come.

Posted on June 23, 2019 | Leave a comment
With some surprise we arrived on holiday deep in Roger Deakin’s territory. Suffolk, where the county butts against Norfolk, with the Waveney as the border, rural and silent and the place where Waterlog, his ‘aquatic songlines’ was born. I’ve never set out to swim in his strokes, but felt it fate to arrive in here for a family celebration without really looking at a map. This ‘secret river’, according to Deakin, was a short run through some fields from our base, and on the first morning I convinced Imogen was should do just that. 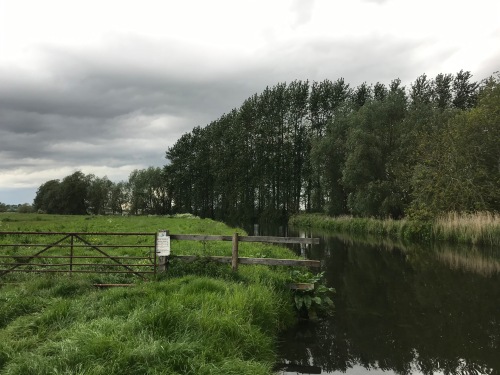 It turned out the Waveney made us work a little, footpaths clogged with nettles, and then paths stretching always just a little further from where the water should be. The first swim then was short, as we had to be getting back, but the next evening, returning by bike, I had time for a longer visit. The Waveney was completely silent, and it was a lonely and slightly strange swim. To be honest having plotted all day a way to get in, once I was I wasn’t quite sure what to do, so I pottered about a bit and scrambled back up the muddy banks.
In between we pay a visit to Beccles Lido, also on the riverbank, heated but outdoors and full of fun. There’s also a glimpse of the Broads jam-packed with day trippers, a world away from the quiet space of this county line.
A few weeks on and another family gathering I stumbled into through the rush of recent months. While I really should start doing my homework in advance I’m tempted to let others keep booking them if these are the places we end up. This time we were in the Test Valley for midsummer, a shallow, fast-flowing chalk stream beloved of anglers. The river appears as we approach where we’re staying here and there. You hear and smell the streams. 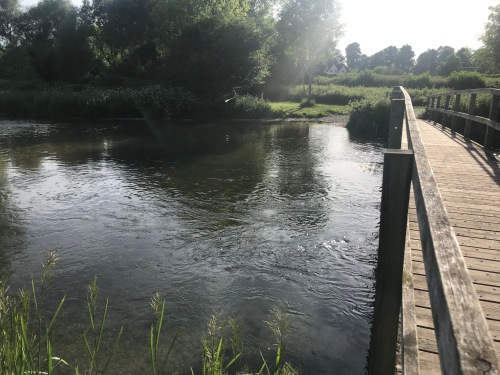 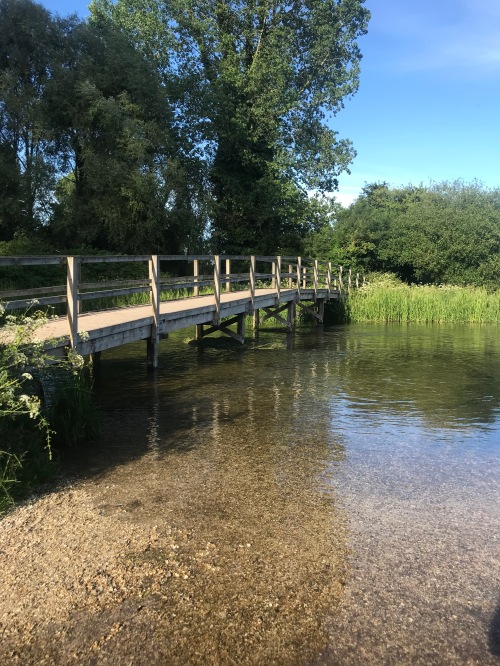 The Ordnance Survey was not playing hide-and-seek this time – a bridge over the Test was five minutes walk through our village. The sun glints off the water as we first arrive, an advance party for several later stone-throwing trips and games of pooh sticks, but this morning was a chance for a just-possible swim in thigh-deep water. The game here is to head under the bridge through the shallower water upstream, then catch the chute rushing under the other side of the bridge, then repeat. The water is cold, the morning glorious.

Like in Suffolk we have it to ourselves. Under the spell of the water, the long days blow gently in the breeze.

At the National Archives are treasures of every kind. At large tables people sit or stand, poring over physical relics of the UK’s past that possibly mean more to the people poring over them at that moment than anyone else since they were first compiled. Hands get dirty with centuries old dirt. Piles of parchment and ancient scrolls unroll for the first time in generations.

I found myself here a few weeks ago as part of some family history, which if you are bored or mad – unless indeed you are a member of my family – you can read more about below this article.

The archives are home to the North London Railway’s staff registers and board meeting minutes, which contain the records of some of my ancestors. In one case, their entire working life. In another, what is apparently their unfortunate passing.

Once I’d hyperventilated at the avalanche of historical detail that came tumbling out concerning fines levied for violent shunting, promotions and seemingly odd deviations in career I spent a while leafing aimlessly through these lovely books. Thousands of people, mostly men, with their working lives laid out in beautiful handwriting. You can imagine a clerk hunched over these volumes, day after day, building up a picture of Victorian London life, when railways were young and the capital was expanding at a fierce rate.

And here’s George Clark. A pointsman (initially) at Hackney Wick Junction, with his father in the company’s service. He joins the NLR in 1859.

By 1893 George was a ticket collector, a change of role owing to failing health after 34 years on points duty. The NLR was a tight-knit community that evidence suggests looked after its own.

But what’s this? January 1896 does not seem to be a happy 37th anniversary for Mr Clarke. As the record states, he was “severely reprimanded for throwing a piece of iron to frighten away some children from station entrance, and striking a man named Bowen who was passing along the street at the time, Clark paid the man 5/ (five shillings, right?) as compensation and was told if this kind of thing occurs again he will have to go about his business.”

You can picture the scene, briefly if vividly captured. Clark’s irritation, and his hurling of the iron. Bowen’s shock, then indignancy – real or contrived – that he is owed some kind of reparation. The NLR management discussing how to deal with this in a proportionate way. And the children, running off laughing, retelling the story to anyone who would listen.

It worked out ok for George in the end. On retirement, after 47 years service he was granted a good conduct retiring allowance of 7 shillings and 8 pence per week. Of Bowen, the children and the piece of iron no more is heard.

My head had started to hurt and I had to go to Leighton Buzzard. The book was gently closed and everyone within settled back into their sleep, with all the slumbering stories of England for company. Until next time.