At the National Archives are treasures of every kind. At large tables people sit or stand, poring over physical relics of the UK’s past that possibly mean more to the people poring over them at that moment than anyone else since they were first compiled. Hands get dirty with centuries old dirt. Piles of parchment and ancient scrolls unroll for the first time in generations.

I found myself here a few weeks ago as part of some family history, which if you are bored or mad – unless indeed you are a member of my family – you can read more about below this article.

The archives are home to the North London Railway’s staff registers and board meeting minutes, which contain the records of some of my ancestors. In one case, their entire working life. In another, what is apparently their unfortunate passing.

Once I’d hyperventilated at the avalanche of historical detail that came tumbling out concerning fines levied for violent shunting, promotions and seemingly odd deviations in career I spent a while leafing aimlessly through these lovely books. Thousands of people, mostly men, with their working lives laid out in beautiful handwriting. You can imagine a clerk hunched over these volumes, day after day, building up a picture of Victorian London life, when railways were young and the capital was expanding at a fierce rate.

And here’s George Clark. A pointsman (initially) at Hackney Wick Junction, with his father in the company’s service. He joins the NLR in 1859. 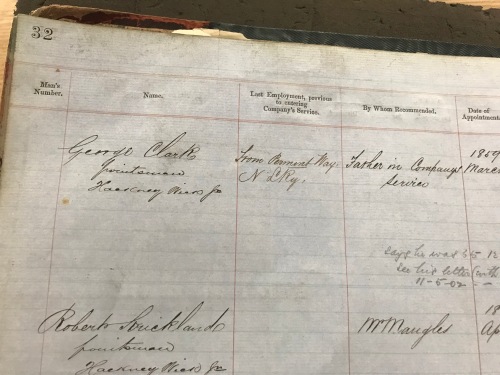 By 1893 George was a ticket collector, a change of role owing to failing health after 34 years on points duty. The NLR was a tight-knit community that evidence suggests looked after its own.

But what’s this? January 1896 does not seem to be a happy 37th anniversary for Mr Clarke. As the record states, he was “severely reprimanded for throwing a piece of iron to frighten away some children from station entrance, and striking a man named Bowen who was passing along the street at the time, Clark paid the man 5/ (five shillings, right?) as compensation and was told if this kind of thing occurs again he will have to go about his business.”

You can picture the scene, briefly if vividly captured. Clark’s irritation, and his hurling of the iron. Bowen’s shock, then indignancy – real or contrived – that he is owed some kind of reparation. The NLR management discussing how to deal with this in a proportionate way. And the children, running off laughing, retelling the story to anyone who would listen. 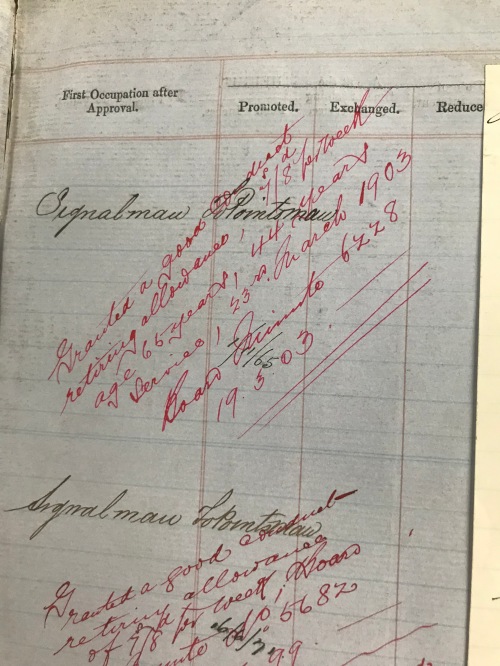 It worked out ok for George in the end. On retirement, after 47 years service he was granted a good conduct retiring allowance of 7 shillings and 8 pence per week. Of Bowen, the children and the piece of iron no more is heard.

My head had started to hurt and I had to go to Leighton Buzzard. The book was gently closed and everyone within settled back into their sleep, with all the slumbering stories of England for company. Until next time.