Was I really here?

On landing, with the Danube glowing soft rich orange in the evening, and into a taxi and the darkening day.

And the traffic so bad I was considering getting out and running ten miles, and did five, or less, or more, much of it along three-lane roads clogged with buses and military vehicles.

Over a river, the Sava, across a vast suspension bridge, and into the city, and through a park whooping at the exhilarating daftness, the absurdity a kind of rebellion and release. You go your ways, this is my thing to do, my wonderful way of life.

A hill too long and steep and traffic-ridden to run up. Past columns of soldiers marching away, then down quiet alleyways, and then I hear it, the noise of the Marakana, the sustained roar at kick-off, the ups and down like a flock of birds, a hive mind of sound. The floodlights glowing first distant, the closer. 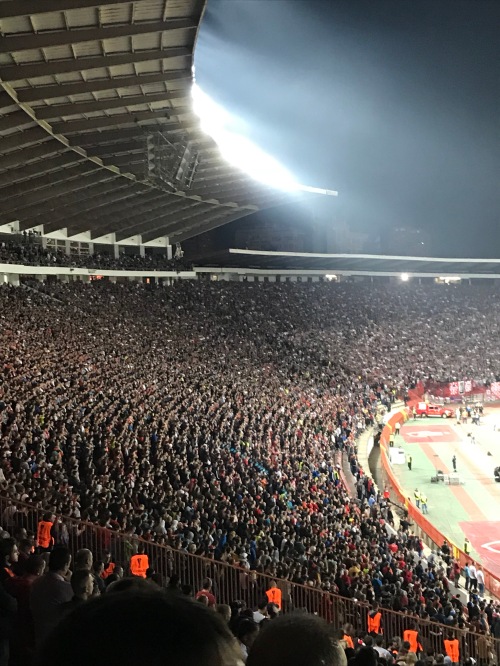 The dash to the turnstiles, and removed of half my stuff by a zealous bag search, some understandable and some strange. And then into the ground, where a match plays out like it’s the most normal thing in the world.

The banner at the start of the second half. Byzantium in Belgrade. A sending off. A goal. A goal! So that’s what we’re here for. Great goal by the way.

The final whistle and the RSB fans staying behind for an hour to continue with their choreography, their songs, flags and dancing, drums and chanting, hankerchiefs and shirts being waves. After 90 minutes we are released to, and Dad and I slip between coaches ferrying fans back into the city and walk through quiet streets back to our hotel, past the Partizan floodlights.

The next morning we are to leave and I know I will see almost nothing of the city. Itself a further act of nose-thumbing at myself. I wake up with sore legs and groggy from lack of food. The taxi is here. The day is bright and the colours on the motorway to the airport are autumnal oranges, yellows and reds. At one point the Pannonian Plain opens up to the north, an endless bread basket for thousands of years.

There isn’t any more for now but there doesn’t have to be.