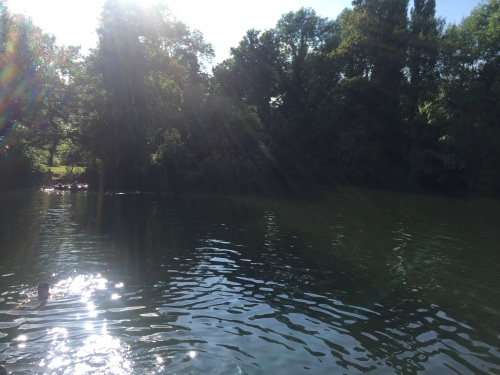 There is another river. At the end of a sun-scorched day’s riding we head down a hill from Cookham, sweet and glowing golden in the late afternoon, and along an unpromising turning towards a village down a long High Street. There’s a pub, made in 1135, when John II Komnenos was on the throne in Constantinople and Henry Curtmantle a young English king. Then a vast tithe barn, and a Norman church, and small path which we walk down. Children in swimming costumes come the other way, dripping at the end of the day. It has to lead to water, and it does. Water, green and lucent, crossed by a sturdy wooden bridge. Across it is an island where boats moor, or putter alongside. They are pleasure cruisers, a word from another age.

The water on the other side of the island is stilled by a weir, itself blocked by an iron boat. The water, sometimes more than a person deep is clean and not cold, the sort of water you want to potter about in, explore up little creeks and under trees.

The following morning, another swim, this time with dragonflies zipping over the water, and no-one else around. A splash, and a darting figure at the other riverbank, maybe an otter, maybe. Let’s say it was. Our bikes stand next to the water. Once out and changed it feels best to walk, then cycle slowly away. In London the Thames does nothing quietly, does not hide and holds drama and history close by. Here there is no time, just the sun dappling on to trees and hiding the laughter and hubbub of those who have stolen a few moments here.