Amsterdam’s easy. Day trip, overnight, plane or train, whatever. It’s so easy I once took the ferry home just to liven things up. Yesterday therefore came as something of a shock. What felt like a routine January visit for work – I come here a couple of times a year to visit Booking.com, who have a vast workforce here – started to unravel the night before.

Upon checking in an advisory of a storm over northern Europe on Thursday warned of delays and all other manner of horrors. I don’t normally need an excuse to book a train instead, and as I could reclaim for the flight I swiftly switched to rail.

On Thursday morning as this revised plan was uneventfully put in place. The new-edition Eurostars are a pretty swish proposition and we reached Brussels without drama. And despite the tannoy warnings that all trains on the German network had been suspended my Thalys to Amsterdam was in situ and showing as an on-time departure. As if by magic, with only a few minutes before departure and with no-one on board, the indicators suddenly showed the train was cancelled. ‘Train 9193 will not run today’ mewled the Brussels Midi tannoy. (The same tannoy that once noted in a blasé fashion that my sleeper to Hamburg was going to be 4 and a half hours late, and you can sleep on a bench until then. I hate that tannoy.) Seconds later, that audible right hook was followed by the bone-chilling ‘all trains on the Dutch network are suspended until further notice.’ A late afternoon museum, a stroll along the canals, maybe dinner in a brown cafe. All disappeared into the ether.

I’m not one of those buffoons who says Belgium is boring. Quite the opposite. But I am not devoted to the appreciation of its capital and have particular numbness towards the charmless zone around Midi station. In mitigation there is a Sunday market where you can buy Moroccan pancakes so all is not completely lost. So I found a hotel on the other side of the city and took a walk there, arriving as night was falling and receiving notices from friends of bad weather in Utrecht, Rotterdam and other Dutch cities. That night Brussels grew placid to the point of silence. I walked to the Grand Place, one of Europe’s great squares, and had an early night before an equally early start. 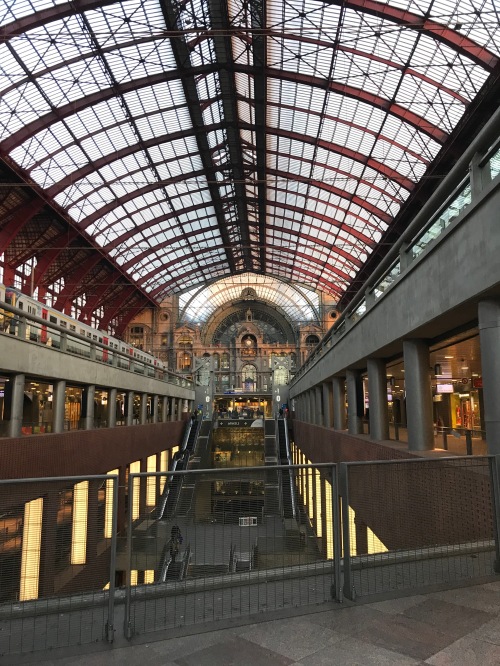 By now it was Friday, and with all my pent-up spare time gone, I had to start making progress to Amsterdam. Trains were running at ‘an almost normal service’ but I was cautious of yesterday’s demand for Thalys trains spilling over into long queues at hateful Midi, so I opted for a slower IC service from Nord, just by my hotel. The curse struck again – seconds before my train to Rottedam was due to leave a notice appeared saying it would depart from Antwerp. Antwerp: 60 miles away. Antwerp: where I was not! So I had to make my way first to Antwerp Central. Again, no great hardship. This is a breathtaking station and very much worth detouring to. The slow stopping service through places of little consequence stirred up some nerves of a slow-slow journey. I need not have feared. After a little looksy around this wonderful station, and some time meditating on WG Sebald’s bleak visit to a silent bar near here the Rotterdam train rolled in. With a greater sense of purpose than before we moved north, first across the border through flat farmland and birch forest and then across great estuaries and canals, past windmills and vast tulip fields, and via a change of stations and a spin of the Wedding Present’s ‘Rotterdam’ I found myself finally and somewhat stubbornly arriving in Amsterdam.

Despite all these delays, my original plan to work from Amsterdam for the best part of 24 hours meant I still had a few hours spare before giving the talk. Somewhere in the back of my head I had stored the thought that I was addressing a hall of 2000 people as I think I’d been told, but I had repeatedly dismissed that as invented fiction. On arriving at the Excel-style arena, to the south of the Amsterdam you’re probably thinking of, the thought that that number may in fact be correct after all came more prominently to mind. This fun-looking event was vast, with two huge halls seemingly dedicated to feeding the hordes of 20 and 30 somethings who work here. After some time I made it to the speaker’s area, a near-empty green room. An hour or so later I was ushered in front of a crowd that did indeed match the attendance at the 1872 FA Cup Final. I was the last speaker before an address from the CEO, and then a rather large party. It seemed that entertaining was the order of the day, and I whizzed through the potted history of my employer and my own very average holiday snaps without dwelling on anything too serious, then fleeing from the stage before popping anyone’s balloon including my own. Doing something like that can rather make you float.

And then it was back out onto the streets of the Dutch capital. After a few visits here recently I am both more familiar and completely hooked on the city’s canals and small streets, ringing with tilling alarm bells and, if you get it right, offering a step back in time that takes the breath away. I found just such a street on a long, half-lost walk back to Centraal. It was perfect – cobbled, lined with thin houses each of a different colour, and each with a winch at the top, gable pointing to the sky, and a cluster of Dutch bikes outside each house. A canal at each end. I wanted to stay here for a while, even though around the corner were another bunch of pot-smoking likely lads, and I still had Schiphol to get through to get home. I couldn’t help it, there’s nowhere better to wander until your feet are sore, by the still waters with a chill blowing off them. 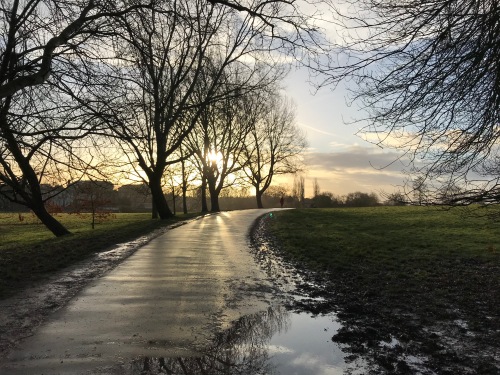 January sinks too slowly into February, an altogether more sprightly proposition. With it the succession of drab, mild days is shoved out of the way and replaced with clear, sharp cold mornings, a north-east wind with extra chill and bursts of sunshine to be grabbed when the moment arises. It feels like winter, and the end of winter. The snowdrops and crocuses on the corner of Merton Lane and West Hill are asserting themselves. Daffodils and birthday cards are not far away. First there is ice.

Because all this is happening I have to swim with a little more frequency. So on a Wednesday I escape to the pond. Swimming during the working week is like being on the outer reaches of the tube. It’s quiet, a little dreamlike, with unexpected space and silence. Two lifeguards look out over the water. The water lurks around 4c. The sun feels closer than it does during the darkest months, but the bright air, matching the frigid depths, doesn’t do much for the chills.

Once in, and whooping as usual, there’s the sky to enjoy. It’s huge and blue. Or white. Or grey. A giant A380 climbs drowsily out of Heathrow and flies silently above my head. The sun half-shines down on the green-black water. I can see my fingers slowly turning a shade of pink. The diving board, marked by birdshit, throws me back in again, and then that’s that.

While I’m getting changed a fellow swimmer notes my enthusiasm, smiles and says ‘So, you really like the deep cold. Ha!’

I find on leaving that I can’t quite do what I planned, which was to run back up to Highgate. A combination of legs and lungs won’t go that far today. So I walk-run, looking at everything so familiar yet so often seen through different eyes. I’ll be back twice more this week, chasing the depths, the deep cold.

Friday’s scheduled swim arrives. I wake up to the insistent thumping of rain on the skylight, and run out slightly reluctantly into the rain and the cold, but not as cold as earlier in the week. It’s dry exiting Highgate tube, and I fool myself into thinking things are milder generally, but the tell-tale 4c on the board posts a warning I don’t really heed. Below 5c things get a step harder. I decide to plough on and do what I usually do. At the mid-point of the swim I feel a long way from the jetty. The heron is hunched over in the far distance. No-one else is here while I swim. As I leave the water someone I know arrives. He’s got a great booming laugh and reminds me to smile about life and laugh along with him. It’s funny to keep bumping into him.

Come Saturday the sun is shining bright and clear but the air is even colder. Imogen suggests I take the tube to the pond rather than fuss and stress over getting to kids out of the house. The kids beam at this information and I feign hurt feelings. Maybe I arrive warm. I cross the matting which covered in rime and turn to face the water. My feet feel like they’re slipping in off the icy sideboards and I dive in more slowly than usual. The water feels fantastic all the way round. And then that’s it. Come Sunday the spell is broken for now for a few days. On Thursday, back again, another gent remarks, grinning, that February is ‘the coldest, the hardest. March is pretty bad too.’

The water, the weather, the air, the cold. Winter is blasted away this way.