Saturday was an exciting day.

A friend invited us to his flat in the old East Stand at Arsenal Stadium (better known as the Gunners’ former home on Avenell Road, Highbury) for a drink and a stroll around the old place. In fact, being a man of impeccable taste he’d snaffled up the flat located exactly where we’d all sat for many years, just south of the halfway line, behind the away team’s greenhouse. 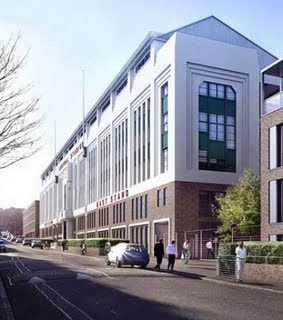 The Highbury Square development is largely complete, but there are obviously quite a few flats either unsold or not yet occupied. Those who are in there should count themselves lucky. The stadium is a unique development, with the classic East and West Stand facades retained and those in the East accessing thri flats by walking in through the Marble Hall. Herbert Chapman may have been moved from his plinth but the cannon and art deco crest remain in the floor, just like you remember it.

Best of all though is the communal garden, or the pitch as it was once known. OK, so it’s no longer got the touchline markings, but there’s no mistaking where you are once you walk out on it. Ghosts are out there with you enjoying a kickabout. Herb himself is doubtless looking down approvingly on such innovation.

This entry was posted in Uncategorized and tagged Arsenal, London. Bookmark the permalink.