A slice of Danish

This article originally appeared in the London Evening Standard, 10.05.2009.

It can take a while to find Aarhus on the map, and longer still to work out how to pronounce the name of Denmark‘s second-largest city (it sounds like Arrhoos, by the way). 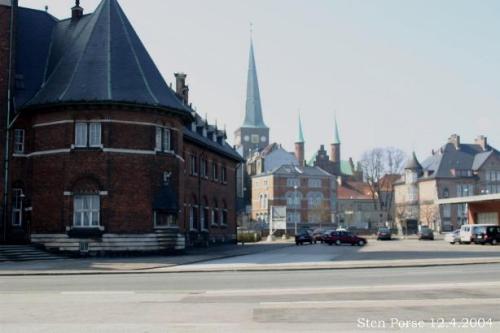 Copenhagen‘s handsome little sister hides away on the east coast of Jutland, in a sheltered bay that belies its important historical role. Once here, you understand why the Danes keep it to themselves.

With a similar easy-going charm to the Danish capital, Aarhus is rapidly emerging as an artistic and architectural hotspot, complete with vibrant neighbourhoods full of stylish cafés and shops.

To get the hang of Aarhus it’s helpful to adopt a Danish mindset. The first thing you need is a bike. That’s no problem.

There are 450 tough-looking clunkers available on payment of a 20 kroner (£2.40) deposit. And unlike some European cities, they’re where they’re supposed to be. Aarhus isn’t hard to get around on foot but everyone else is on a bike so you may as well join in.

A short pedal from the station and distinctive Forties town hall (visit on the daily guided tour) is Aarhus’s most attention-grabbing attraction. ARoS is one of northern Europe’s finest art spaces, an enormous red-brick cube built in 2004 by (you guessed it) a Danish design team. Inside, nine floors of modern and traditional art are linked by spiralling staircases and curving, snow-white walls.

ARoS sets the tone for the city: fresh and funky, with a nod to both tradition and the world beyond Aarhus. Its bright and dazzling interior seems to be inspired by the austere interior of the city’s Domkirke, whose stunning frescos have been revealed after centuries behind Reformation era whitewash.

Most cycles, however, end up being deposited next to outside tables in cafés and bars at the first hint of sun. Trying to blend in, I did the same.

The Aarhus Å (which means creek in Danish) is lined with al fresco options but for cutting-edge turn the other way from the station and head to the trendy Frederiksberg area, in particular the oldmeets-new bars and restaurants on Jægergårdsgade. Aarhus excels at modern Scandinavian cooking at Malling & Schmidt’s much-heralded restaurant in Frederiksberg.

All over town brewhouses can be found. They make and serve everything from lager to IPA to wheat beers, as well as cooking up excellent-value pub grub.

The Latin Quarter and narrow cobbled streets south of the creek are lined with independent small shops — fashion and design are specialities, plus a huge number of superb children’s boutiques.

And with the Danish kroner offering better value than the euro these days, Aarhus is a great destination for this summer.

That bike did come in handy again on day two when I shook off a fuzzy head with a ride through eye-poppingly lovely woodland. Fifteen minutes after leaving my hotel I had come to Moesgård.

The main reason to come here is to peep at the 2,000-year-old Grabaulle Man who, after millennia preserved in peat, doesn’t look bad for his age despite what appears to have been a painful death.

The bold can take advantage of some of the best sandy beaches in Scandinavia.

I did — and reckon that between June and August the water’s just about perfect. In fact, there are lovely beaches up and down Jutland’s coast, especially around Ebeltoft and Grenaa to the north-east of the city, that are perfect for families.

Every Dane has their own favourite spot, though — just lean over and ask the couple at the next table and you’ll get some great suggestions. Over on the west coast are some of Europe’s finest surfing and windsurfing spots.

But further exploration can wait for another visit. Denmark beyond Copenhagen is an undiscovered European frontier — and it’s cheaper and quicker to get to from London by air than Manchester or Leeds on a train.

WAY TO GO THE FLIGHT
Ryanair flies from Stansted, returns from £13, http://www.ryanair.com

THE HOTEL
Hotel Guldsmeden (www.hotelguldsmeden.dk) has doubles from £119 B& B, http://www.visitaarhus.com.

THE CULTURE ARoS
(Aros Alle 2, http://www.aros.dk). The Aarhus festival, 28 August to 6 September, is the largest cultural event in Scandinavia, http://www.aarhusfestuge.dk.

One response to “A slice of Danish”