Fans of unusual engineering works thrill to tales of the spiral escalator which was found, derelict and broken, at the foot of what is now the liftshaft of Holloway Road Piccadilly Line station. This post tells the story so far.

During April’s London Transport Museum Depot Open Day – one of the capital’s best transporty days out, I sought out the remains of the escalator again, and it’s obvious that some diligent assembly work has taken place. You can now get a clearer idea what it would have looked like and just what an unusual construction it would have been. Some pictures below: 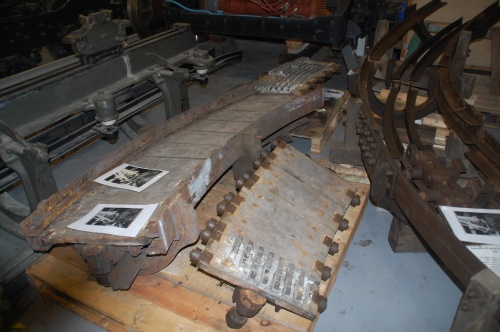 Just after I posted this I spoke to Tim Shields, a Curator at the Museum who is in charge of making more of this and other large objects at the Acton Depot. He told me:

In short, I am working on a new museum ‘revisiting collections’ initiative, which aims to capture and promote the ideas, stories and developments behind key engineering objects now in storage at Acton. – (The Edwardian spiral escalator being one of those selected.) It is envisaged that the project will achieve these aims by improving the conservation, labelling and interpretative display of such items.

A careful start was made in November on piecing together what remains of this rather perplexing and unique jigsaw puzzle. To start the first phase of work, a clearer understanding was needed of the volume of material in our care. To do this, we temporarily assembled as much of the spiral structure using wooden pallets and blocks.

Following on from this, three corresponding sections (offering best display value) were selected for further inspection and conservation. – Its interesting to note that on closer examination of the drive chain mechanism, a large number of track runner bearings were found to be in very good condition, many containing original grease over 100 years old!

Throughout January the metalwork (including exterior framework and chain guide channel) was stripped, cleaned and treated with a conservation grade preservative.

Planning is in progress to commission the construction of a specifically designed base, which will support the permanent display of several reassembled parts. Scheduled to be completed by summer 2010, it will enable a large (4 meter length) section of spiral escalator to be displayed at the correct incline, allowing visitors to gain a better understanding of how it possibly once worked.

When complete, the top will look most complete, and the spiral escalator will be stripped away towards the bottom.

Tim also filled in a few blanks in my knowledge. He said that what records existed suggested that it was successfully built, and used in a test phase for one day but never saw public use, eventually falling out of favour and into disrepair.

As you can see from Tim’s quotes above, over the next few months the reconstruction outlined above will be taking place, so by the time of the next Acton Open Day there should be plenty of interest.

Big thanks to Tim for taking the time and trouble to call.

Also in Acton in April modellers came up with some seriously impressive creation. This fictitious incarnation of an Abbey Road station includes some hairy miniature Beatles strolling across the famous zebra crossing. 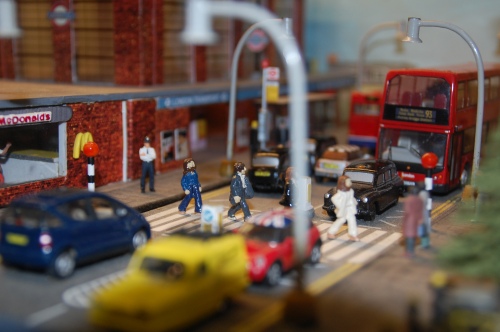 2 responses to “More on the Holloway Road spiral escalator”