Athens in a day

Or, a day in Athens. Written on location in August. Sorry for not publishing before now. I’ve been a bit busy with the day job!

A stopover in Athens is a treat, and for me was a chance to see again I city I last visited in 1992, and thought the world of despite nay-sayers loudly trumpeting its downsides.

I loved Athens on that fleeting visit: the bright, slippery rock of the Acropolis, the searing heat of the summer streets and best of all my Dad having an enormous tear-up with a taxi driver which resulted in us piling in to the taxi, shouting a lot, then getting out again without having got anywhere. And I was excited to return. 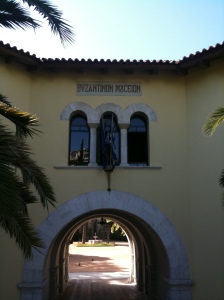 Byzantine in period, not in outlook

Now, like then it is August and Athens is sweltering. The cooling breeze that made Chios (where I’d been for a wedding) delightfully temperate was absent, and I chose the mad-dog Englishman approach to exploring, charging round in the heat of the day, seeking shade where it was offered.

Nearly 20 years on, Athens felt familiar and different. The wide streets were there, as were the street-side caves of Kolonaki and the sense of gentility mixed with raw, youthful energy that I found thrilling last time. I am no longer a slightly awkward teenager wearing a loud shirt and straw hat, but my love of history and charging round cities remains. Athens did not disappoint.

My flight from Chios landed at 8am, leaving me 11 hours before my next hop home to London. I was able to leave my bag at left luggage – €4 for a half-day, and get a metro trip into town and back for €14. The train took 38 minutes to get one stop short of Syntagma, where if the Acropolis is your only goal you an change lines and be whisked to the foot of the legendary rock.

I hopped out Evangelinos, from where the Byzantine Museum is a quick stroll away. It was a treat which skilfully filled in the blanks between Roman and Ottoman occupation, and viewed late antiquity through a Greek prism. The icons were particularly spectacular and it made for a better introduction to the Byzantine World, ironically, than anything to be found in Istanbul. The copies of iconic mosaics from Ravenna and Constantinople, painstakingly recreated by masterful modern scholars of the form were a delight to be able to inspect. 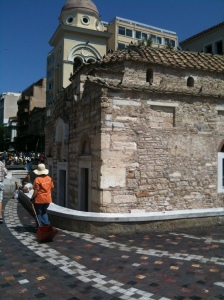 Downtown Athens is dotted with seriously ancient churches like this

After a quick visit to the British Council, where Patrick Leigh Fermor worked for a while and a cafe where you could feel his ghost scribbling away in the sunshine it was on to the Benaki, which for reasons I’m not entirely sure of was huge fun. It was bright and airy with a terrace cafe affording my first glimpse of the Parthenon and Panathenaic Stadium. Among many wonders in a wide-ranging collection they had a drawing of Athens in its classical pomp by Edward Lear. I wanted all their books, especially some stunning bilingual works on Greek architecture. 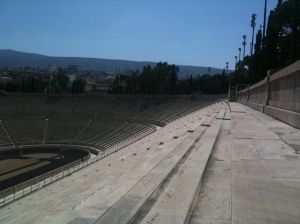 From here I must add a note of caution. I’m footsore and a little sunstruck after doing what I did and would recommend an edited version of this. On the other hand I saw a huge amount and made the most of the day. The Panathenaic stadium, venue for the 1896 games was terrific value at €3 including an excellent audio guide. I walk on to Syntagma, Monstiraki and the flea Market (underwhelming) and on to the pedestrian promenade the links the market to the Acropolis via a host of ancient treats. I hopped up the Pnyx, saw the theatre of Herodus Atticus and ogled the Parthenon from a wide variety of angles before diving into the Acropolis Museum. In case you’re wondering, by this point I was sweating profusely and opted out of the hike up to the top in the afternoon sun. 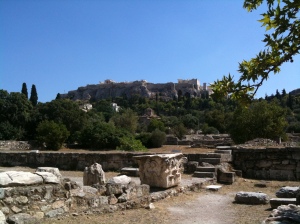 The Parthenon shining in the afternoon sun

The new Acropolis Museum is now 7 years old, which feels scarcely believable. It is a key sight and deals quite marvellously with the Elgin Marbles issue. The museum’s presentation of the friezes eloquently and without hysteria makes the case for their return. It is convincing, informative and above all keeps the constant theme of telling the story of the Parthenon while leaving the visitor to draw their own conclusions. It is another place with a superb viewing terrace.

Outside, it was back to the glorious sweat of the Athenian wanderer. It’s easy to get lost, or lose the tourist crowds, in the backstreets of Plaka, and I loved the walk to the Agora as much as rambling around this huge site. On your way out on the Monastiraki side there are lots of lovely cafes to refuel in.

Lastly, a few other small notes in case you’re wondering: Athens was orderly, clean and friendly. It was not expensive and eating was very reasonable – €4 for a souvlaki and coke at a cafe in a lovely square is a good deal in western Europe in August. Athenians are friendly, proud of their city and seemed delighted I was there. In every room of every museum I went in, even the busy Acropolis Museum, guards grinned and said hello.

It will not be 20 years before I next return.