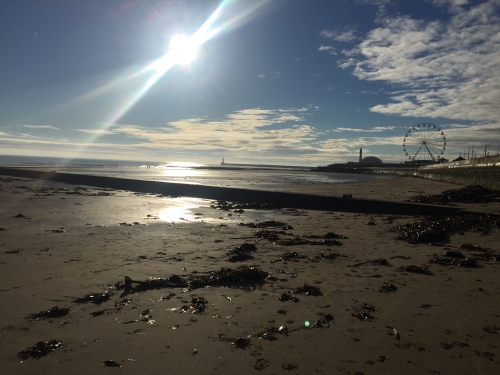 I wanted to call this Roker Beach, but I didn’t go there. I liked the name and the connection with the old Roker Park, scene of a classic away trip in 1991. My friend Paul and I had taken the coach from London, a truly awful experience with hours of Roy Chubby Brown videos and flatulent fellow football fans, hoping to see Arsenal win the title. The match was drawn 0-0. We had stood in the tipping rain for two hours as Sunderland fans promised to tear us limb from limb outside the stadium. On the final whistle they performed a remarkable volte-face and decided instead they were our best friends. Six years later Dennis Bergkamp scored an incredible goal to settle an FA Cup replay. That rocking old ground is gone now but the name remains special.

Roker Beach wasn’t quite what I was after though. Continuing on to Seaburn I found it. A broad curve of sand reached out into a gentle sea, set on fire by the Saturday morning sun, huge and low in late October. Before arriving I’d half fretted about my bag and clothes while swimming, but the beach was so huge with only a few dog-walkers that distant fears, as usual, melt away in the moment. I strode past one walker into the sea, swam for a few minutes, mostly swimming into the golden water lit up by the sunshine, then retreated. The water was cold, but cold always passes. In fact, a couple of hours later the thermostat came on around my internal organs and I was boiling, high up in the away end at the Stadium of Light. Sunderland that morning, a town with such a beautiful name, something else for the soul.