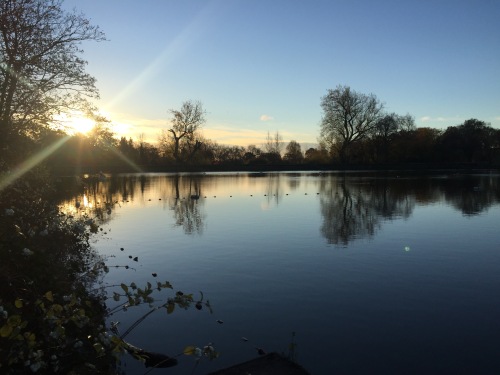 An enforced absence from swimming on the Heath coincided with a startling and prolonged plunge in temperature. While riding down Highgate West Hill day after day for a fortnight, often in chilly-lovely dawn sunshine I fretted about the effect this would have on the temperature of the water. It would be getting colder, and I would not be in it, so that when I got back into it I’d find it tough going.

So once the stitches were out the first thing I did was drive down to the pond and dive in. I knew it would hurt. It hurt. The water, which according to notices had gone down five degrees, bit hard. I must have looked like I was floundering, for the lifeguards came out for a closer look, then decided I’d make it back to the jetty in one piece even if my bodily extremities would be forever compromised. But it was done, and winter was back on, and I was free to keep going.

Four days later I returned, keen to reprise Friday mornings in the water. The run from Highgate tube up the hill to the village and then back again is sharp, and warms you just enough. This time the sun was just climbing over the trees leading down to the dog pond. The shock was less, but the raw feeling the same, and the odd sensation of being marooned in the far corner that strikes on cold days lingered. But getting out this time felt like the mental rebirth i had been looking for at the start of the week.

The following day I was back again, and feeling very much in the swing of things. The door, with MEN ONLY written on it, once again had the aura of a portal to another world, a gateway past which normal rules don’t apply. The conversation sounded like the 1950s, all quiet murmurs about literature and politics, all have-you-heard and don’t-you-think. And then in the water I was wonderfully alone, the sun higher and brighter, setting my path bright yellow, and offering fractions of warmth.

And this felt right and terrific, because from here I ran along to the cafe, to meet Imogen and Winnie, and we talked with smiles and red faces and felt fantastic, because we were here and Saturday’s should be here, and because it’s not mad if you do it because you love it and for that time you can see and hear and shout more than anyone who doesn’t.