Walking though the deserted, snow-lined streets of Denver with a spring in my step, Union Station looms into view. One of the great terminals of the American railroad system, the beaux-arts interior has been recently funked-up and now sits squarely at the heart of the city and, in many ways, the Amtrak network and America itself. Pigtrain Coffee is doing brisk business with incoming Cowtown commuters, who do not linger as long as I do over the fridge magnets and t-shirts.

Here the California Zephyr pauses for breath on it’s 60-hour odyssey across the country. After leaving Chicago and crossing the plains to the east, the eight car behemoth pulls in here each morning and picks up waifs and strays like me. I am, without exaggeration, expecting one of the great journeys of my life today and pretty much bouncing on the spot as the enormous wagons reverse into the station. As it turns out the journey, though eventually truncated, thunders superlatives.

We’re invited to form two queues, one for sleeper passengers and the rest for coach car cheapskates like me. I’ve paid $114 for the 30 hour trip to the Pacific Ocean, which gets me a roomy seat with plenty of legroom upstairs on a double-decked coach. On a cold January Friday the train seems to be about half full, but many passengers are heading into the Rockies, packing skis in the tender coach. After some tinkering of what is clearly old rolling stock we’re off, only to pause by the Platte River as a gigantic freight train loaded with a mile of containers passes in front of us.

So much later, and so much has passed, and how much more still to go.

From Denver we accelerated into the mountains, foothillish at first, then spectacular beyond words through Glenwood Canyon. Initially there is a rush for the Observation Car, tempered by some well-phrased chiding by the car attendant lady, who also pops up with historical details and anecdotes, which due to the decrepit PA make gloriously little sense. She either realizes this or runs out of stories. Lunch is served early, and I am sat as a lone traveller with two others, both of whom are on rail odysseys that make my trip seem like a gad into the West End on the tube.

It is after this, after everyone gets out at Glenwood Springs that the trip settles into a strange and lonely pilgrimage into the American West. With little company and the snow driving horizontally, the train feels heroic as it smashes along the ice-covered tracks, horn honking at bald eagles lurking in the ever-present Colorado River. A lone man, miles from anywhere, walks purposefully between the tracks and the river. Who is he?

Quiet times staring out of big windows fill hours, with texts from home reminding me of the real world. Today it seems I can have both. I feel lucky. The hardest decision I had to make today was whether to go to Dave’s Depot at Grand Junction, Colorado, the only retail outlet on the entire 2400 mile route from Chicago to San Francisco. I go in but there’s nothing to buy. I was over-zealous in pre-departure snack buying. Sorry Dave. Another train coming tomorrow.

Grand Junction seems to barely exist, high in the Rockies but distant from them. It’s fine station building is boarded up. The town itself seems to be quietly falling asleep. Perhaps seeking to make up for this, Union Pacific railroad has stationed hundreds of diesel locomotives here, lined up one after another. It’s hard to fathom them all getting used when two can pull freight trains miles long, but they look shiny and ready to go. The absence of British-style platforms adds to the feeling of their size. We stare up from rail-level, and the locos seem to stare impassively like Easter Island moai, rather than the chirpy smiles of our own engines, viewed face-to-face.

Today is Donald Trump’s inauguration. As usual I can find nobody who seems to have voted for him. Kind people express concerns about what he’ll do, and what effect he will have on America. They don’t see the country as robust. To them, it is fragile, perhaps because their own lives have so little protection in work, health, anything. And yet they’re warm, and interested, and caring for each other in thoughtful conversation. Warm and cold, America. Perhaps only kind people take trains.

Before dark we drive through a red-stone canyon that runs for miles, studded with rocky outcrops and smooth-lined caves. It is completely breathtaking, up there with the very best train rides I have ever done. A man opposite me almost silently plucks at a banjo making an uncannily-timed and perfect soundtrack. Who is he, and where has he come from, framing the moment with delicate riffs. 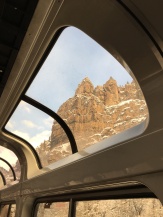 Though sunset is a little tragedy on its own, the hush that descends on the train after dinner turns another page in the day. The Serbian chaps in front of me, Balkan in their directness and their stern expressions, continue to chat with great jollity.

In the darkness I can see snow-covered fields, small homesteads, trees sunken in snow. Salt Lake City, with temples and domes, comes and goes. It is freezing here and I do not linger on the platform.

At night the coach where I’m sitting is warmed by human bodies and silent. I sleep in odd contorted positions, some less uncomfortable than others. At no point apart from now has it crossed my mind that I could have paid more for a bed in a sleeper, or that I could have skipped the whole thing by flying so it can’t have been all that bad. Tennessee is two timezones back. Soon it will be light. Just as well because Winnemucca, Nevada is locked in an icebox. From there we speed across the Nevada desert, snow-covered with rolling hills on one side as dawn breaks on Saturday. Over breakfast I do meet some Trump voters, Baptist Christians who seem to regret their actions.

No sleep until the Pacific Ocean.

And then the thread snaps. In a second, the journey stops. On arrival at Reno at half past eight we are told the train will wait until 2pm to clear the mountains, and ‘that we should enjoy all Reno has to offer’. After strolling the Truckee River path, having a coffee and visiting the Nevada Museum of Art I have done that. On returning to the train I notice that it has started to smell of BO, and someone mentions a 4pm departure, and an air of quiet denial appears to be in order. The trains sits in a trench beneath Reno, engine humming but forgotten. An itchy finger reaches for the flight timetables, and a Southwest hop over the same mountains that are blocking us pops up. I only dither for an instant, then grab my bag and go. The airport is another world – everything modern, all on time, fast and frantic, but we get through, and I arrive only two hours behind schedule.

The California Zephyr, in its ambition and effort, says much about America as it once was and may still be, and in its foibles and frustrations nods to fragility and uncertainty about what has been solid and unshakeable. Or perhaps all that’s what it seems to me, and it is simply one of the world’s most beautiful train rides.