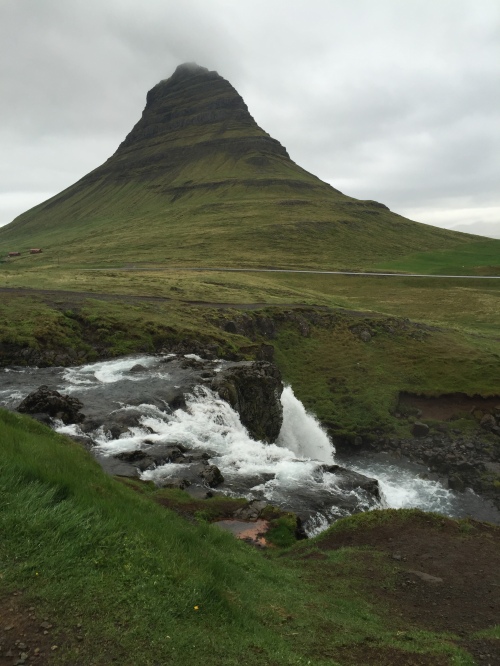 Light, light, light. Iceland in June and there is no darkness. When you choose to stop and take a moment here there is no wind, no rain, and no noise either. The tapping of the keyboard and the background noise of another guest making a call is all there is.

This town is a sort of point of nothing further, and the end of the road after a frantic and spectacular 30 hours or so in Iceland. At numerous points on this quick-fire raid on the west of the country I have had cause to note how lucky I am, and how this is quite the most spectacular landscape of any place that I have ever visited.

Tonight, as the cloud wafts over Kirkjufell, standing sentinel over the north of the town, both those thoughts are coming into my head again.

I had meant to hit the ground running in Iceland, and take in Pingvellir on my way to my bed at Borgarnes, north of Rejkyavik . The road leading up to the Ping from Reykjavik, up through the Mosfell valley was an immediate thud to the senses, green hills and ribbons of river poking through the cloud and light, persistent rain.

Pingvellir was interesting and the first place I found a smattering of other tourists completing an afternoon golden circle. Two groups of divers kitted up for a plunge in the Silfra streams that fill in the rifts in the valley floor stood apart, the mooched off towards unseen depths.

It is very lovely. Even so, Magnus Magnusson makes it sound better than it is, playing up the huge historical significance of the site.

I drove straight on, north onto route 550, past a sign warning anyone with a rental car not to drive off the road. the road was gravel, but still a road. I drove on. And after ten rattly miles or so of gritted teeth I found myself in what looked like Tibet, or what I thought Tibet would look like. Land stripped of vegetation, blue rivers cutting over bleached rock, and glacial lakes. At one point I reached a junction and turned left. It felt like the remotest place on earth.

There had been coaches of people at Pingvellir. I saw no-one for the best part of two hours. After what felt more like a lifetime, with Felt and Cocteau Twins, wild and strange on soundtrack I arrived, a little frazzled and elated, into Borgarnes, sweet in its own way, for a dip in the B&Bs hot-pot, a garage dinner and an attempt to sleep.

I was up early, early enough to have breakfast and sneak out before the Finnish couple I was sharing the B&B got up. As they were Finnish, I reckon they’d have cowered in their room until midday had I continued to clatter round. Either way I was on my way across the flat, Lewis-like scenery that led to Snaefellsnes what felt like early, early, early.

The first few miles slipped by in the excitement of the new day, and looking back at the map there is nothing until a waterfall that I scrambled up a steep track to get as close to as I could.

That set the tone for the day, driving a little, seeing something interesting, strolling over to it, or up it, eat a jelly baby, repeat. 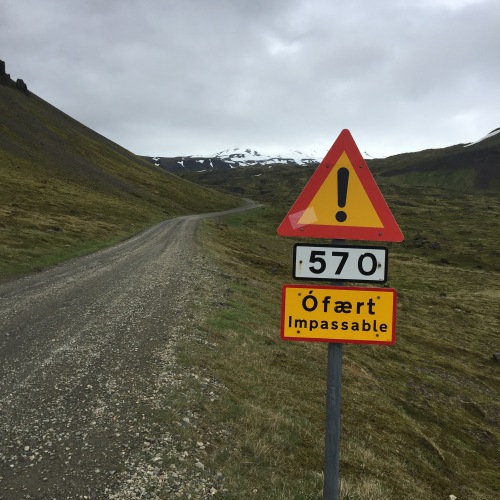 Volcanic cones, odd rock outcrops, waves crashing on rocks. And then there was the turning to Ondvandarnes, and the strip of golden sand where the buried Viking was found, and a swim in the Greenland Sea. As I like annoying my father by telling him every time I swim somewhere cold or unusual or indeed any time I swim outdoors as he seems unable to do it I quickly told him I’d done that, too. ‘Most morbid swim’ he suggested on account of the cadaver who spent a few centuries under the sand. 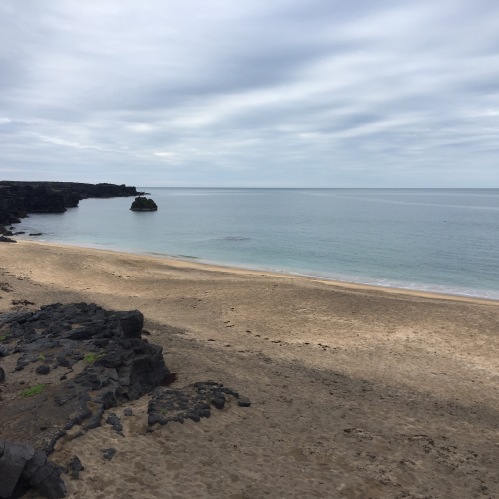 Given the intensely beautiful scenery all around me, I initially regretted taking a few hours out of it to go whale spotting. I shouldn’t have. Three hours gazing at the water ended up being nearly five in the company of so many orcas and sperm whales the crew were laughing. Top ocean predators. Top everything.

I woke up in Grundarfjordur, with Kirkjufell glowering behind cloud and hurried to use the shared bathroom before anyone slowed me down, then similarly gobbled breakfast, made up the last of my rolls and fled.

On the road by half past seven and at the Stikkisholmur turn-off at just after eight. I decided against heading here, Iceland’s towns not holding much allure. The ferry to the Westfjords would have to wait for another time.

After an hour of more incredible views I had driven back to Borgarnes, where I summoned the nerve to go for a swim in the local pool. First you must follow signs telling you which parts of your body to wash before getting in. Bollocks, armpits, ears. It makes sense really. Other people’s filth should not be a bathing companion.

The pool was warm enough to feel welcoming, and after 20 lengths I headed for the hot pots where aged locals were swapping gossip. Never one to wallow for too long I was soon off again, resolving to see Reykjavik with the remainder of what remained. The only people up in the capital on Sunday mornings, however, were other tourists, and I was only really keen on seeing the Íslendingabók, the chronicle of the settlement of Iceland, and the spot where Ingólfur Arnarson had thrown his high seat pillars , deciding where to settle on being the first person to arrive in Iceland. The book was hugely understated, and the museum it was in underwhelming, while the statue was very fine, if a most unlikely place for some rods to have washed up on the shore, being as it is on top of a hill.

And that was all there was to the capital, I think. Possibly a bit harsh but I wouldn’t bother next time apart from to try a few of the swimming pools.

In fact i decided to spend my last hour looking round Reykjanes peninsula, which was flatter and more like Lewis (lots of Iceland looks like Lewis) than other bits, but interesting nonetheless. At one point I happened upon a family rushing to watch the local football team kick off and I wished I had longer, maybe forever, to be in Iceland.

Back in the real world and somehow still outside of it I flew on to Washington for the usual undignified schlepp through US immigration to catch my onward flight. I put having tried to leave my passport at immigration down to being mentally still on a road in rural Iceland. After what seemed like a dozen more hurdles I arrived in Franklin, Tennessee. I can’t think of a great contrast involving travel in the western hemisphere.

When I read these words back I have done a disservice to the excitement and wonder of those few hours in Iceland. Take these words and pump them up with breathtaking Icelandic air and views.

This entry was posted in Uncategorized and tagged Iceland, travel. Bookmark the permalink.

One response to “Iceland notes”