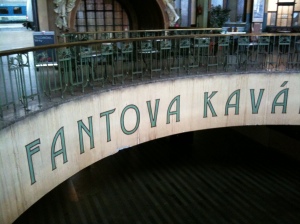 Inside the old booking hall of Hlavni station

I’ve just got back from a flying visit to Prague, my fourth and shortest visit to the city. Somewhere along the line the Czech capital has become the biggestndraw in central Europe, behind only Paris and Barcelona in the European league table of most popular of city destinations. It’s not as cheap as it once was, but that’s not necessarily a bad thing. The stag groups who once mobbed the Irish bars of the Stare Mesto – Old Town – have packed their bags for unfortunate stops further east in search of pints which cost less than a pound. they’ve left the city in the clutches of tour groups in search of gothic bridges, classical music in Baroque halls and foaming glasses of Czech beer.

1995 seems a long way away now, and the city then may have already begun morphing into the propserous, if less distinctive city it has become. But when I stepped off the train from Vienna, which had sped across the shimmering central European plain in the scorching summer of that year Prague felt only just out of the clutches of communism. The big western brands were here, but not in the force that they are today, and there were mullets and 20p pints eve in the most perfect back-street old town bar. My then girlfriend and I stayed in a room in an apartment owned by an elderly Czech widow who spoke enough English to thrill us with her accounts of the Second World War and the slamming shut of the Iron Curtain. Outside the big windows of that apartment thunderstorms broke the stifling heat.

So in the two hours I had free to explore I set out to revisit some of the half-memories of that stay. Most prominent was the National Museum (evocatively emblazoned with the inscription ‘Musei Regni Bohemiae’, standing sentinel over Wenceslas Square. As I stood on the steps of that building and looked north-east I spotted the twin arches of Hlavni station, dotted with statuary. A walk there revealed a real find. The station is a treasure trove if art nouveau, a gallery of mosaics, wrought iron and gabling with tracks running beneath it. The best part, shunned by the decision to build a six-lane motorway next to the former main entrance, is the original ticket hall. Stop by if you’re in town.

A great walk from Hlavni is to thread through back streets to the Charles Bridge, the Eiffel Tower of Prague, even if the reality is crowded with slightly underwhelmed day-trippers missing the point by taking pictures of themselves with the Vlatava – and no bridge – in the background. The highlights of this walk are too many to mention, just point yourself in the general direction and meander.

And that was that. Time to go, just a tiny taste of Prague. In 1995 I hopped on a train to Stuttgart, exiting via Hlavni’s hallowed tunnels, swapping to a service through Milan to Switzerland that is still the most beautiful rail journey of my life, and from there along the French Riviera to Cerbere – Port Bou, then finally an agonizingly slow and busy local service on to Barcelona. But Prague, well, it’s different.