Notes for cyclists going to the Outer Hebrides

The Outer Hebrides, or Western Isles of Scotland lend themselves well to a linear cycling trip. Ferries link the islands and the mainland and in between boats there is much to challenge both the sporting and touring rider. I fall somewhere between the two in that I tour on my own but wish I had a sporty bike and would therefore be able to ride faster. There are other things I could do to ride faster such as lose weight or train more but I don’t do either of them, for shame.

1. Ferries are your friend 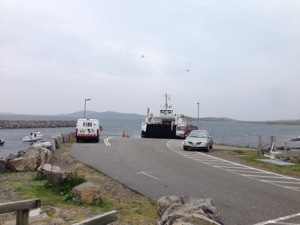 The islands are connected either by causeway or by a fine string of ferries. These Caledonian Macbrayne-operated bad boys can take you anywhere your own pedal-power can’t. Bikes are carried free and there’s no need for reservations. Room is always found for bikes. I don’t know what would happen if they had a bazillion bikes turn up all at once or something but I assume they’d work something out.

2. Assume the weather will be bad

The week before I arrived, and even as I was in the ferry from Oban to Barra the sun was shining and it was almost too hot. It didn’t last, and I had three pretty rough days weather-wise. No matter, apart from ever-so-slightly diluting the obvious beauty of the beaches of particularly Berneray and Harris a little rain is to be expected. But I would pack for it: leggings and overshoes should be standard issue. I didn’t have either and survived, but I have been envious of those who have had them.

Strong winds are a fact of life, and not just after a double-helping of Stornoway black pudding, the fantastic local speciality. I was told by nautically-minded father-in-law that prevailing winds were south-westerly (he then kindly informed me that this meant from the south-west rather than blowing in that direction which was also useful), and this held true for the first day of riding. On subsequent days the wind swung round to come from the north-west, then due west. It was strong every day, and every day I had some benefit from it.

You will face some conundrums in planning, and in reality once out on the road. These are the ones I faced, and the decisions that I made.

Dilemma (i) – tarry on Barra

It takes a long time to get over to Barra from Oban – five hours – and it’s a lovely little island. If the weather’s good there’s sea-kayaking and superb beaches on Vatersay. My schedule didn’t allow for this but I wish it had.

Dilemma (ii) – one day through the Uists

The wind got behind me once I got over Eriskay and onto South Uist, and didn’t let up until I had to decide which way to go round North Uist. This made my decision for me but like the above call I heard great things from other people about so much, especially the northwest corner of North Uist and some of the beaches on South Uist. You might meet lots of naked bird watchers. Added bonus. 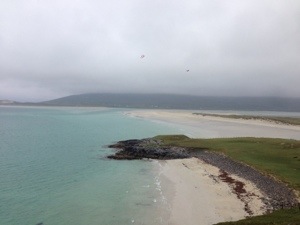 The ‘Golden Road’ around the east coast apparently appeals to sporting cyclists, while the west is for beach-seeking tarts. I went west. Those who went east raved about it. I was pretty happy with my choice too. Less happy about not having much time to explore Harris on foot. Another time.

To see the main sights of Lewis, approach it from Harris, and base yourself at Stornoway requires following a route in a figure of 6. This includes a jaunt north to Ness, the furthest point north-west on the British Isles. Given the point above about the wind at some point on the 34-mile out and back to Ness you’re going to be riding into the wind. For this reason I didn’t, and after looping round from Callanish to Carloway and the west coast headed inland for Stornoway. I met a cyclist heading the other direction who made me feel bad for not going to ‘the Butt’, but I put the thought out of my mind. I met him later and he’d ridden the wind one way and caught the bus back! Cheat! Wish I’d thought of that.

I found places to eat dotted around, but not necessarily when and where I wanted to stop. There’s a super tearoom on Berneray (The Lobster Pot) which serves meals including evening dinner, and Callanish Visitors Centre has a proper Elektra coffee machine. I don’t often do recommendations but 9 Callanish is a smashing B&B and the breakfast I was served here was a match for me, and I’ve been eating for England on this trip.

Bus transport around all the islands is excellent. Even very small communities are connected by regular services. I met one group of very jolly chaps who were going from Barra to Stornoway in a day, then heading back to Ullapool that night. I assume they made it with ease, and this would be an excellent express way to see around here.